The inacarnate artist Namkha Tashi was born in Upper Yarlung in 2044 B.E. or 1500 A.D. In accordance with the prophecy of the eighth Karmapa Mikyo Dorje that this person was his emantion who would extend his influence. Namkha Tashi studied with Kunchok Phendey,who was himself considered an emanation of the Chinese princess Konjo. From Kunchok Phendey, he learned the stricht proportions as laid down by the Sharli (eastern casting method) of India. He was also instructed by the fifth Shamarpa Konchok Yenlag and the fourth Gyaltsab Rinpoche Drakpa Dondrup to paint in a distinctive style. This style was to be based on numerous examples:

The Chinese scroll painting ofered to the fifth Karmapa Deshin Shekpa by the Ming emperor Yong Lo of China.

The masks Dashelma (the face in the moon) drawn by a crowd of artisans, witness to the miracle when the third Karmapa Rangjung Dorje showed his face in the full moon to the emperor.

Furthermore, they directed that this style was to incorporate elements from three countries:
the forms to be in accordance with the Indian standards, the coloring and textures to be by the

Chinese methods and the composition to be in the Tibetan manner.

The artistic tradition which Namkha Tashi thus established, based upon these instructions, became known as the Karma Gardri or the ‘camp style’ of the Karma Kagyu school.

The word ‘camp’ (gar) in the name refers to the custom of the early Karmapa hierarchs, particularly the seventh Chodrak Gyatso, of taking retinues of hundreds of people and travelling from place to place with supplies and baggages loaded on horses and mules. At resting points camps of felt tents were used as lodgings. Due to the size of these tents, the temporary settlements were referred to as the ‘huge religious encampments of the Karmapa’, or the ‘huge camp which adorns the world’. The custom and traditions which developed from this became the so-called ‘camp culture’ and in particular the painting was known as the ‘camp style’ or Gardri. 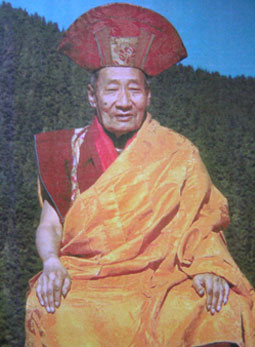 Thangla Tsewang was born in the region of Arap in Dege Palyul in eastern Tibet in the year 1902. Gifted from an early age, he was artistically inclined and studied many artistic media such as painting and sculpture under two accomplished Gardri masters, Wari Lama Lodro and Pema Rabten. From Wari Lama Lodro, who excelled in drawing , he studied the basics of Thangka painting and from Pema Rabten, who was the holder of the Karsho lineage, he studied coloring.

Begining with this extensive training in the arts, he spent his entire life in ceaseless creative activity. The previous Situ Rinpoche, Pema Wangchuk Gyalpo, conferred the honor on Thangla Tsewang of remarking that his paintings were so good as to be fit to be installed on shrines even without being formally consecrated. Whowever viewed his work, whether they were discerning persons or not, found the forms illuminating. Because his work was completely in accord with the import of the sutras and tantras, it was accepted as authentic by all. 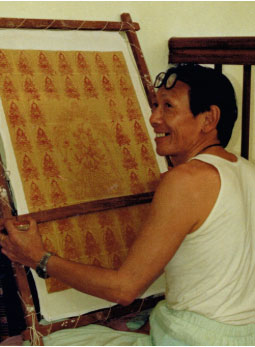 Gega Lama was the renowned and much loved master of the Karma Gardri school who brought this tradition to India when he left his home country Tibet. Born in the small village of Rinchen Ling in the district of Upper Lingkar, Eastern Tibet, Gega Lama started his training at the age of eight with calligraphy lessons and received further education in Buddhist doctrine, dance, painting and music when he entered the monastery of Chokor Namgyal Ling at Tsabtsa.

In 1947, aged sixteen, he took up the study of thangka painting with the renowned master Thangla Tsewang. By the age of twenty-two Gega Lama was recognized as an artist in his own right. When he left Tibet at the age of twenty eight, he had to leave his books, diagrams and other valuable resources behind in his home country.

During the first years in India, he learned the art of casting images, vajras, bells and so forth in metal and bronze with the artisan Damcho. As it became apparent that there was a growing demand for Tibetan Thangka painting, Gega Lama applied himself to rebuilding the invaluable body of diagrams and methods necessary to the painting of Tibetan Thangkas.

In 1981 he wrote and published a unique and unprecedented complete guide book on the drawing and painting of Tibetan Thangkas under the title ‘Principles of Tibetan Art’, which was received with delight by experts and students throughout the world. He faithfully preserved and transmitted his tradition and taught many devoted students, including his own son and successor Tharphen Lingtsang. 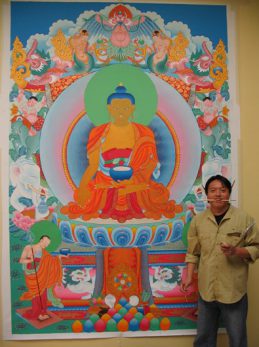 Tharphen Lingtsang is the son of the late Karma Gardri Master Gega Lama. Born in Darjeeling, north-east of India, Tharphen received both a combined Tibetan-Indian upbringing and a western education in an English Jesuit school. After graduating, age eighteen, he became a faithful student of his father’s with a strong wish to help preserve the sacred tradition of Karma Gardri painting.

Gega Lama gave complete transmission to his son and for many years they worked side by side in their school and studio in Kathmandu, Nepal. They taught aspiring students together, faithfully maintaining the traditional method of apprenticeship, and made numerous thangkas and frescoes. By the time of his father’s unexpected passing in 1996, Tharphen himself had been a respected master in his art for a number of years. Gega Lama had asked him to make the illustrations for his second book, for which the manuscript was nearly completed.

In 1999 Tharphen moved to the Netherlands where he gives regular courses in several Budhist Centers across Europe. Besides giving courses and painting thangkas on orders, Tharphen is dedicated to the work of Gega Lama’s books in the hope of further publishing and spreading the unique knowledge they contain.